Get a Grip on Victory with Nike Mercurial Superfly

You need great grip on the pitch to secure victory for your team. There’s no wonder pros like Cristiano Ronaldo, Kylian Mbappe, and Erling Haaland wear the new Mercurial Superfly; these cleats simply provide incredible traction on natural grass surfaces. Nike has specially designed the Mercurial Superfly’s Aerotrak 2 footplate and stud arrangement to provide extra grip while accelerating, braking, and moving laterally. The Nike Aerotrack 2 zone with micro grooves and chevron studs will help keep you upright, whether you’re fighting for the equalizer, or locking down on D to preserve a lead.

The Nike Mercurial Superfly 7 soccer cleats continue to be a popular option, but the Superfly 8 is taking center stage. If your game is built on speed, you want the Nike Superfly 8 on your feet. Both cleats feature the Dynamicfit collar, Flyknit upper along the collar and throat, and Vaporposite and Vapornet material. If you’ve reached a plateau in your performance on the pitch, a new pair of boots may be in order. For unrivaled agility, superior touch, and a snug, yet comfortable fit, the Mercurial Superfly line from Nike is a smart choice.

Fit matters when it comes to cleats. Browse new Nike Mercurial cleats for sale at SoccerPro.com, and find the look that fits with your attitude and playing style. Lightning-fast shipping and simple returns make it easy to find the boot that best fits your foot. Wear your new cleats around the house and see how they feel. If they’re less than perfect, exchange them for another style. With the right fit, you’ll feel like your Mercurial Superfly is an extension of your body. Play like a superstar in elite footwear from SoccerPro.com.

Here are some other perks to these top-of-the-line cleats:

Lead your team to victory this season. Check out more Nike soccer cleats from SoccerPro.com.

PRIVACY: Your email address and content of your message are private and will not be shared outside of SoccerPro. Information will be used to provide a response to your request. SoccerPro.com may send you additional marketing emails related to soccer gear. You have the opportunity to 'opt out' of marketing emails at that time.

Alex Lee, Kamuela, HI
Nike Mercurial CR7 Superfly FG Soccer Cleats – Black & Total Crimson
I have been using superfly for about 8 months, and it was great! People say that their sole plate broke, shoelaces are easily cut, or the dynamic fit collar just rips off, but I never had those problems! Definitely recommended, and this colour is also dope! One problem would be during break in time, u might get some blisters on your heels, but the boot wil pay you off by its sock-like feel and awesomeness!

My son is LOVING these!

Heidi, Farmington, MO
Nike Mercurial Superfly FG Soccer Cleats – Electric Green
I can’t tell you how pleased my son is with these cleats! He’s been playing for nearly 11 years and these by far are the best cleats he says he’s ever used. And SoccerPro is amazing! We ordered these on Thursday with free, economy shipping (8-10 days), but got them two days later on a Saturday with his first game of the season scheduled for Monday. Talk about one happy teenage boy!!

Q: Are your cleats real?
A: Yes. All of our footwear is legit and come fresh from manufacturers.

Q: Do these cleats fit true to size?
A: Yes. There’s no need to adjust your normal footwear size. 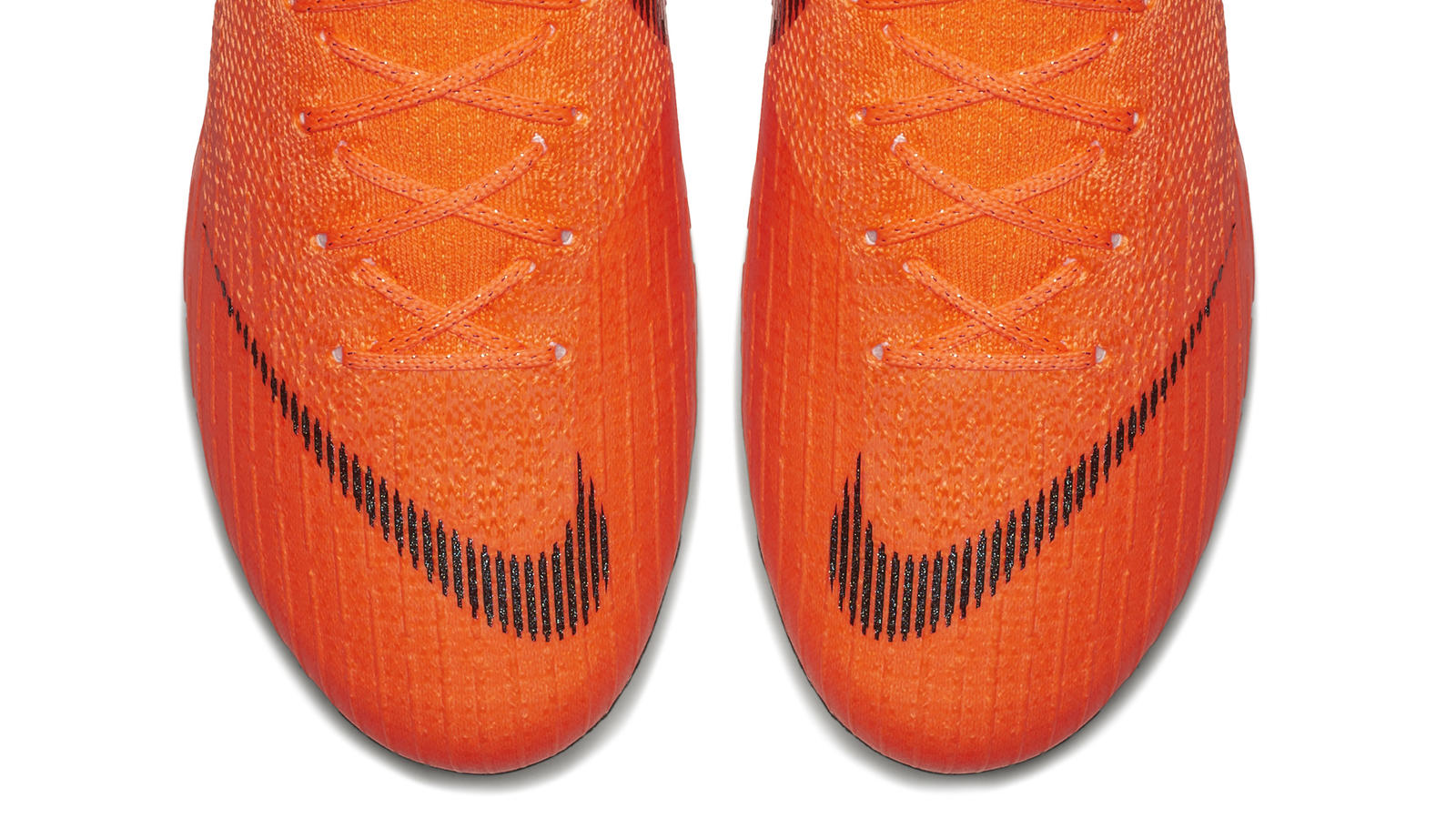 FEEL: SOFTER TO THE TOUCH
The plush feel of the Mercurial 360 can also be attributed to further advancements in Nike’s All Conditions Control (ACC) technology. Previously, ACC was applied on top of the finished Flyknit product, creating a thin layer. Now, ACC is embedded into the yarns prior to knitting, eliminating the additional skin without compromising the performance benefit. The result is a matte finish on a texturized upper that is softer to the touch but can still battle the elements.

TRACTION: LESS HOOF-LIKE, MORE CLAW-LIKE
Traction is provided by precisely placed studs in the forefoot and heel. Nike’s designers got their inspiration from agile cheetahs and focused on traction at speed, leading to the minimalist approach they have affectionately referred to as the cheetah paw.

THE LOOK: A CLEANER PROFILE
It’s been 20 years of Mercurial and the guys at Nike have given the latest Mercurial a clean aesthetic with a small forefoot Swoosh and a bold ?M? on the heel.
On the Mercurial Superfly, the Dynamic Fit Collar takes on a lower cuff, similar to the modified version Cristiano Ronaldo has preferred in recent seasons. Both the Superfly and Vapor versions of Mercurial 360 feature a soft, playable material as part of the effort to improve your soccer performance.

Evolution: Another Fundamental Redesign that Advances the Mercurial Vision

Resolution: Made the boot more comfortable and natural fitting by increasing flexibility & resiliency.

Resolution: Reduced material requirements while increasing durability, integrity, & support… Lighter & Stronger with an upper that adapts to motion of foot & locks it in place. 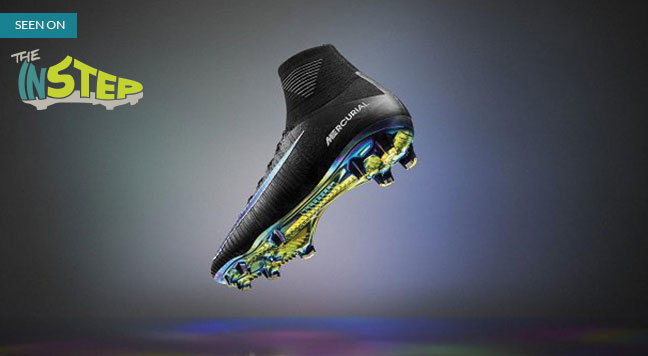 We should be thankful that Nike takes performance as seriously as they do. Every time it seems they have perfected the modern soccer cleat, they return with another improbable innovation. [ Read more… ] 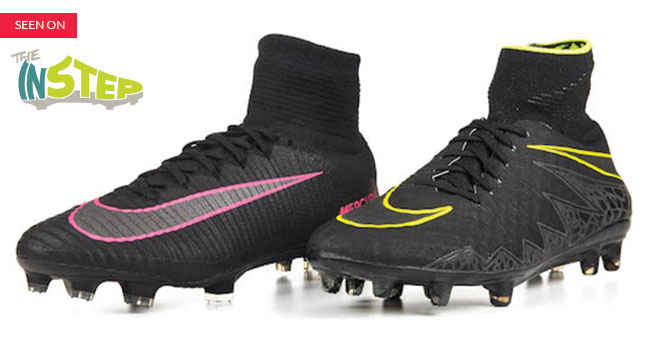 With the introduction of Flyknit to soccer equipment, the world truly seemed to have entered into a new era of possibilities. An absolutely amazing creation, Flyknit has a stretch to create a flawless fit while having the structure necessary
to be used on an area that needs so much support while still allowing free movement. [ Read more… ]