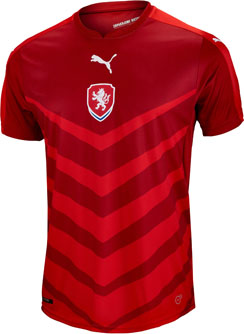 The Czech national team has had some surprising success in the Euros. No, they're not a traditional power, but in 1996, they finished runner-up and in 2004, they reached the semi-finals, eventually claiming 3rd place. Pretty good for a country of just over 10 million, eh?
For the 2016 Euros, you will find them in Group D with Spain, Croatia, and Turkey. That's no cakewalk, but keep in mind how this team likes to overachieve. During the tournament, you will see them in the Puma Czech Republic Home Jersey. This red beauty is full of Czech pride. When it comes to handsome national team jerseys, Puma never misses, and this Czech shirt is proof of that.
At SoccerPro, we've got the BEST collection of national team soccer jerseys!
Reviews

There are no reviews yet.